"I swear I couldn't look away!"

"It had me transfixed! under a spell! Entranced!"

"You mean to say you were completely unable to perform any action other than stare at the object?" 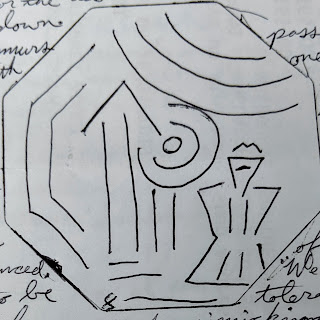 The Tribunal looked at the Accused, each trying their best to determine the sincerity of the statements.

The facts of the case were clear: the Accused had stood slackjawed while his charge had been kidnapped. Or dognapped, to be more precise. It had all been caught on camera: a blank stare, a man in a balaclava, and a pilfered pooch. All that was left for the assembled was to determine what sentence to hand down.

A moment of murmurs passed as the five people in wigs consulted with one another. The Accused stood stock still waiting to hear his fate. After what seemed like forever to those so involved, the Tribunal's spokesperson addressed the court.

"We find you guilty of all charges," the spokesperson announced. "We cannot allow such behavior as yours to be tolerated."

The Accused stood for a moment, mimicking the posture for which he had stood trial. Before the bailiff had a chance to put him in chains and lead him away, however, he protested.

"Wait! Would you say none of you would fall prey to the object's charms?"

The Tribunal looked at one another. "No," the spokesperson declared.

"Fair enough," the Accused said, shutting his eyes. Before anyone had a chance to react, he had reached into his pocket and had drawn out an object of almost magical command. The court stood transfixed.

The Accused fumbled his way to freedom, not daring to open his eyes. The last words he heard that day were those of the spokesperson.

Email ThisBlogThis!Share to TwitterShare to FacebookShare to Pinterest
Labels: illustrated, one page fiction