The Beast is a Metaphor

"Oh my fucking God - it's coming right at us!"
At that, alarms started blaring throughout the ship. Panic was the order, though a few pushed through the bands of people in order to try to save the lives of everyone onboard.

"Try to stay calm, everyone!" our presumed protagonist commanded. "Make your way to the lifeboats and shelter unless we give the order to launch!"

The command made only the slightest change in the general demeanor. Too busy to be frustrated with the stupidity of the masses, our protagonist - a young woman named Laura, as I've written too many male characters recently - patted her uniform ritually as if some answer to the current predicament were hidden in one of her pockets. Bumped one time too many by the passengers, she pushed, climbed, and shoved her way onto the bridge. 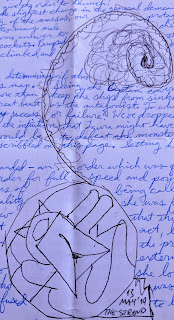 Laura scanned the room, determining if this was going to be a story of man vs. nature or man vs. man. Seeing the Captain cowering in a corner and the first mate doing little more than keep the ship from sinking, it was obvious the great beast would be the antagonist. To what end though? What change would come about by success or failure? We've dropped ourselves squarely in the second act, with only the intuition that Laura might have something to prove and that the way to prove it would be to defeat the monster that some drunk Hawaiian airline personnel scribbled on this page. Setting her jaw, she made a choice.

"Give me the wheel," she commanded - an order which was quickly accepted by the first mate. She rang in the order for full speed and pointed the ship in her chosen direction. After years of being called 'non-committal' or 'wishy washy' for her bisexuality, she was fed up with the bullshit and discrimination She knew that this backstory would have been better served in a first act, but here we are, discovering together what internal demons the protagonist must overcome in order to face down an external threat. In any case, she knew well she loved who she loved, regardless of gender; that others couldn't deal with that was their own problem. She made her own choices and refused to be bullied about them any further.

"I love who I love," she declared mostly for her own ears, "and I kill who I kill!" The ship, now under full power and under the direction of a confident protagonist, barreled toward the beast. Knowing it would be a minute or so before the conflict had its resolution, Laura ordered the life boats to lower and all the non-essential crew to flee. If the ship survived her risky choice, they could be picked back up. If not, well, they would have a good chance of surviving on their own.

Having overcome the societal stigma around finding all sorts of people attractive and having grown slightly as a character from unnamed protagonist to being a uniformed female fighting societal expectations, Laura steadied her grip on the wheel. Would this be a tragedy? Would this turn out well? With such a sympathetic protagonist, was the ending ever in doubt?

The ship rammed into the colossal beast and tore it in half. Despite its menacing aspect, the monster was still mere flesh and blood - a great ship of steel weighing tons upon tons tore through it like a slow motion bullet.

It took a day to wash away all the blood and viscera, even with the help of the returned passengers. It took another to nurse the hangovers from all the celebrations. Eventually, however, Laura got everyone home, safe and sound.
Posted by Simon Pennon at 12:37 AM