“Madmen part their hair on the right, you know.”
The statement was issued without the slightest acknowledgement of its target. The young woman who made the statement remained melted into the couch cushions, her eyes affixed to the small screen she held in her hand.

“What in the world are you talking about?” The young man, her brother, touched his hair as if an answer had nested itself there. One hadn’t, so he walked up to his sister’s feet.

She ignored his presence for a few moments, if only to stay in control of the encounter. He loitered, waiting for an answer. 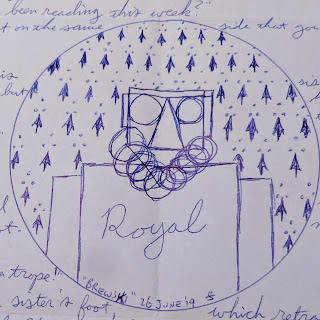 “Because of my hair?”

“As *evinced* by your hair,” she said, looking up to meet his eyes. “Crazy people part on the right.”

Ethan showed no reaction to the news he was insane. All considered, he took the diagnosis quite well.

“What have you been reading this week?”

“Evil people part on the same side that you do.”

Ethan grabbed his sister’s big toe. She tried to pull away, but he was ready and well practiced in the art. Ethan flashed his most malicious smile.

“Don’t!” Jordan squeaked as her brother’s other hand neared the underside of the entrapped foot.

Ethan released his sister’s foot, which retracted under a blanket as if spring loaded. He waited for her to continue.

“Superman versus Clark Kent - right handed people pull the comb from their left to their right.” Jordan explained. “So Hollywood uses the left-handed part as a short-hand for not good. Look!”

She held out her phone, which had a list of bad guys and their sinister hair parts. The whole thing seemed as common as white hats and black hats in westerns. Ethan tossed the phone back to his sister.

“This whole thing is stupid,” he said.

Ethan walked to the kitchen, then, after waiting enough time to make it seem coincidental, he walked back through the living room and to the bathroom where he stared at himself in the mirror. He ran a brush under the tap and brushed his hair forward. Narrowing his eyes, he reversed his part, pretending to be right-handed for a minute.

“Stupid,” he said, looking himself in the eyes.
Posted by Simon Pennon at 6:23 PM