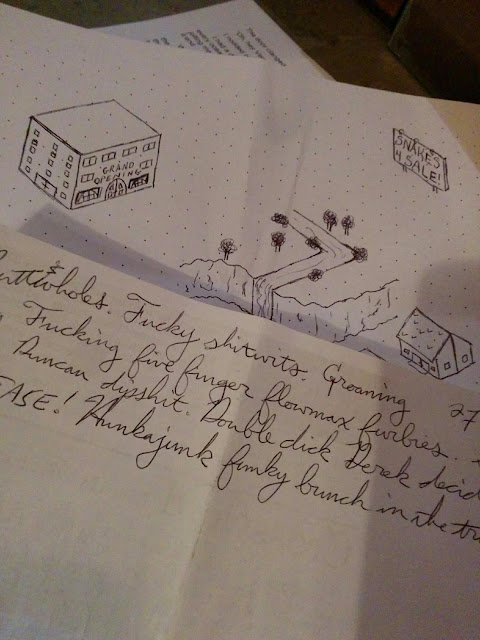 Posted by Simon Pennon at 8:59 PM No comments:

Keith was never very good at dealing with shame.

"I can't fucking believe she'd share that," he groaned. His secret life as a cult leader had crept into his normal, ordinary life in this suburban town. It seemed everywhere he went, all eyes were on him.

I stared my crotch right in the face, knowing damn well what it was up to. The knocking told my crotch that it was to start the ceremony. The guests were the best Craigslist had to offer, but really, you get what you pay for. Let's face it though, my crotch didn't have much money. The door swung open slowly, revealing two men and a woman.

"Are you Keith? Your girlfriend promised discretion..."

I used to have a political blog, but now I don't, so I'll post this here:

I've been seeing a lot of talk about redistricting and gerrymandering recently. To my reform-minded friends of all stripes, might I suggest that redistricting is only a small part of the puzzle and arguably both the least important and least likely to succeed.

The easiest and most likely to succeed reform we can make for our single-member district system is to require a MAJORITY of the vote. Right now, in every election, we have a system called "First Past The Post" - you get the most votes and you win. This creates the spoiler problem we're all familiar with - if you vote for the candidate you want to win, it's possible that you draw votes away from your second choice (see: the rhetoric against Stein and Johnson this past election). This shouldn't happen and it's easily fixed. Contact your State representatives (NOT Federal - I really mean the people who are in your State capital) and ask for legislation to require a majority of votes in single-member district elections.

Much harder but much more important is to push for some form of PROPORTIONAL REPRESENTATION. Go ahead and look at election results in your area by party. Now look at the makeup of Congress. Look at the makeup of your State legislature. Look at the makeup of your city/county legislative body. It's weird that none of them match the votes, right? If citizens vote for 40% Pizza Party, 35% Birthday Party, and 25% Bachelor Party, we would expect the legislature to match the preference of the citizens, not gamed so that, say, Birthday Party has 55% of the seats. I hesitate to dwell on recommendations for proportional representation, but I did want to bring it to your attention - it would, after all, make gerrymandering obsolete.

*** Philadelphia Friends, we could institute a system called "Mixed Member Proportional Representation" in Philadelphia City Council which would open the door to better and more diverse representation with ease. Our Council and our voting machines are already set up for it - with 10 districts and 7 at-large members, it's as easy as flipping a switch. ***

Reformist friends, you have my apologies for the length of this post. I'm also sorry I don't have cool graphics or a catchy "the second way to improve democracy will SHOCK you!" headline that might make you "Like & Share!". But I felt it was important to get this out there.

I'll gladly talk your ear off about voting systems at any time - that's what I have my degree in, after all - but assuming you want to hear it from someone who's not me, I do highly recommend checking out CGP Grey's YouTube series on "Politics in the Animal Kingdom".

So, fight your fight against Gerrymandering - it's important to do so! But make sure to add Majority (easier) and Proportional Representation (more important) to your list of "fightin' words".


Posted by Simon Pennon at 1:41 PM No comments:

Email ThisBlogThis!Share to TwitterShare to FacebookShare to Pinterest
Labels: politics

He returned to his room, crestfallen, the day's events weighing heavily on his heart. He was the King's man, but he took no pleasure in today's particular duties.

The muscular man eased himself onto his bed, wincing with each small movement. He rubbed some salve onto the scrapes and smaller wounds not already bandaged by the temple's healer a short time earlier. He squeezed away the shill in his hands and lit two more candles at his beside, vowing to light his small fireplace in a moment or two.