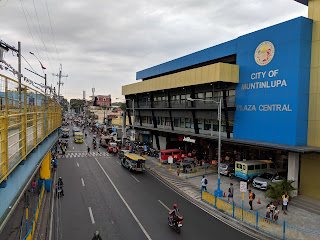 Throw me in the water
Watch me sink
My brain a leaden weight
Now bobbing atop my jelly body
If capsized a cannonball in a condom
Watch me as I rise from rest
Slinky neck stretched
Dragging face on floor
The slime that is my life
Seeping from my mouth
Watch me as I write these words
Each penstroke painful
A train of thought stopped in station
Closest I’d get to a head of steam
Is if you throw me in the water
Posted by Simon Pennon at 12:02 PM No comments: 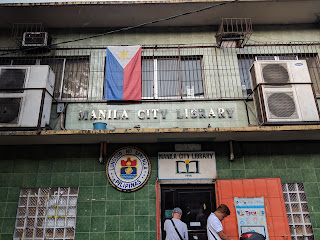 Dot matrix printer
Books wall to wall
Dozens of students
Having a ball
Portraits of men
Standing up tall
Just a few blocks
From City Hall
Posted by Simon Pennon at 11:57 AM No comments: 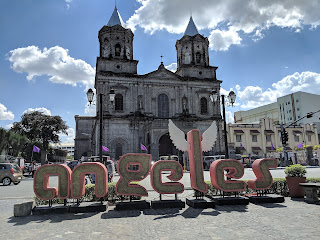 Yes we have WiFi, use this computer
But I need it for my phone
No phone, computer, sir. Only computer
Well I guess I’m on my own

What’s there to do in Angeles City?
Get Lost? Wander? Despair?
With terrible maps and bad advice
One can do all of those there

My podcatcher shows that I've listened to 279 episodes of Radiolab. It will stay at that number. This has been a long time in the making (obviously), but at some point the delightful edutainment podcast left and was replaced by a well polished approximation of what idiots think intelligence sounds like - the Big Bang Theory of podcasts. Where once I listened to episodes eager to learn something new, now they sit, continually being pushed to the bottom of my queue. I should have stopped a while ago - it is partially anger at myself for not having done so which is fueling this particular rant.

My first annoyance - the thing I always had to grin and bear to get to the content - is the way the hosts waste my time by speaking for the guests, often intersperced with the stupidest babble imaginable. A fictitious example:

Host 1: And so we went to Philadelphia to interview Simon
Simon: Hi, I'm Simon
Host 1: He's an expert in flags.
Simon: I live in Philadelphia and I'm a vexillologist.
Host 2: What did he say? Veximotoxilist? Vexipagoloist? Fleximotologist?
Host 1: Vexillologist - he studies flags.
Host 2: Ohhh, a vexillologist!
Simon: I like studying flags.
Host 1: And we brought him in to talk about flags.
Host 2: Flags? Like the flappy things? The things you put on flagpoles?
Host 1: Yes, the things you put on flagpoles.
Host 2: Red, white, and blue? The Star Spangled Banner?
Host 1: The very same!

Read more »
Posted by Simon Pennon at 9:24 AM No comments:

Read more »
Posted by Simon Pennon at 3:12 AM No comments:

Hop in the way back machine with me to September 2010. I lucked out. Stumbled my way into a Federal career and picked Philadelphia as my first choice as a "Get Out Of Florida Free™" card. My rationale was that my sister lived here so I knew one person, and I had spent my entire life in easy suburban living. Dropping myself in a bona fide urban environment would be a culture shock, but like they say in poker you can’t win if you don’t put something in the middle.

Year one I spent mostly getting used to my new job and trying to keep my truck’s tires intact. They were only slashed twice, so that’s a win by Philly standards. Year two my sister got married, and the month before that happened I bought a house two blocks away on Juniper Street after realizing that South Philly is a collection of amazing smaller neighborhoods and not a bad place to hang your hat. But the thing is I didn’t really take advantage of that right away. Anytime I’ve ever switched environments - new class, new school, new job - I sit back, observe, and wait for the right moment to insert myself into the group. I think that’s one of my strengths and a key reason why I get along with the majority of people out there.

After two years of mostly focusing on my job and getting comfortable with living alone, I finally decided to venture out and try something new. Thanks to the local Philadelphia subreddit I’d learned there was a weekly happy hour at a bar two blocks from my office, right next to Independence Hall. Try something new, right? What’s the worst that can happen?

Here’s what I learned. The worst that can happen is you stay at home doing nothing and meeting nobody. But I didn’t keep that up for too long. In February 2013 I walked into Cooperage Wine & Whiskey bar and met two random dudes who are still amazing buddies to this day. And that led to meeting more people through that happy hour group. Which led to me getting more social and willing to go out alone and see what happens. Which led to me checking out a new bar called SouthHouse around the corner from my house.

Armed with newfound confidence I started discovering a community of friends and neighbors based around both of these bars. A few of the friends I met at Cooperage ended up buying houses in South Philly, and for the first time in my life I really feel like I’m part of a community. I’m 42 now and I’ve lived in 10 different states. Recently I realized that at 8 years this is the longest I’ve ever lived at any one address in my life. And that just so happens to be my very own house. Like Han Solo said, “she may not look like much but she’s got it where it counts.” It's no mansion but it's home. It’s a damn good feeling to sit back and realize that I managed to build a decent life for myself out of complete desperation 10 years earlier. Yeah, I did the heavy lifting but I also had support along the way from my mom, sister, family, the Government, and a few friends. I’ll never forget that.

At some point I even seriously stepped outside my comfort zone and tried dating, which historically has been a non-factor for me. Too many other things to worry about without that headache. Ended up with mostly misses, a fleeting hit or two, but I learned a lot and it might not have been possible if I hadn’t gained confidence from feeling like I was part of a community. My biggest takeaway from that was I realized I do pretty well as a solo individual. And thanks to the many friends I’ve made here I never really feel alone.

As someone who never really found a place to call home, it looks like I finally stumbled across one all the same. I can walk into a local bar and get into a great conversation with a stranger that just so happens to also be a neighbor, and I manage to fit in. I know how to order a cheesesteak without looking like a jabroni (seriously, it's not that hard, don't hold up the line). I studied just enough historic sports trivia to blend in with the locals who grew up with heroes like Mike Schmidt, Bernie Parent, and Eric Lindros. Most importantly, I’ve met great friends here and for the first time in my life really feel like I belong somewhere.

I wrote this on January 21st, 2019 at a local bar: Taproom on 19th. I spent most of the night keeping to myself, listening to music and thinking about old friends, as is my style. By the end of the night I was having great conversations with locals I'd never met partly due to beer and partly due to the openness and community spirit of the residents. One thing was consistent throughout the night: I was surrounded by the people and energy that makes South Philly arguably the greatest neighborhood in the world.