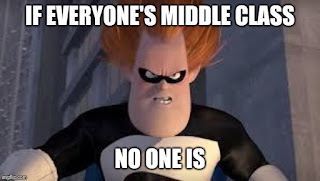 At this point, claiming to be "middle class" is the last thing holding together the American worker's psyche - everything's fine as long as one can claim that title, like being proud of being called "captain" on a sinking ship. We dare not put place protections for "the poor" because they'll take money away from "us" - we dare not repair the boat because it'd mean the "captain" would have to get their hands dirty. I recall an infuriating online discussion about raising the minimum wage to $15/hour where an EMT complained the increase would give fast food workers the same wage as him (which he was complaining he was struggling to make ends meet on). He wouldn't look up the ladder to see who was holding him down - he just knew he was okay as long as he was doing better than fast food workers. He was "middle class", after all.

Here's the thing, dear reader, you're not middle class. Almost no one is. You can argue that at some point in America's history there existed a large middle class, but that's definitely not true today, not when a majority of Americans can not afford a $500 emergency expense. You're working class. Get that in your head - working class. Here's a take Jeff Foxworthy's "you might be a redneck" set.

I'm willing to have a discussion of what constitutes being in the "middle class", but will reject any definition that is the sociological equivalent of "has a pulse". Here's one that I think works: has or potentially has control over someone else's access to capital, but not complete control over their own.

Most of us, as humans, sell our labor. Whether it's ditch digging or typing documents, that's how we earn the money to put food on the table. This is work. We are working class.

On the opposite end of the spectrum, there exist people who no longer have to sell their labor. People with capital. Capitalists. Sure, some of them work, but if one day they decided not to, well, they wouldn't have to. It's not a particularly high bar to hit, either. Before you put Rich Uncle Pennybags in your head consider this: if you were gifted a million dollars tomorrow, you could live a comfortable life on just the interest, assuming you managed it well.

Somewhere in between these two, then, exists this mythical "middle class". Maybe they own a small business. Maybe they have enough of a stock portfolio that they'll retire early. Maybe (to try to include the midcentury American "middle class") they're part of a strong union - having democratic control over corporate access to labor fits in my proposed definiton.

But what of the working millionaire? The famous actor? The star athlete? The person who must always make more money because their lifestyle depends upon it - the person who would go bankrupt if they stopped working? Simple: if they control their own capital, they are capitalists. Stupid capitalists if they live a working class lifestyle, but capitalists all the same.

I know I'm not saying anything new. I know I'm repeating a hundred thinkers, just using different words. I know this blog post isn't going to solve the problem, but I needed to get it off my chest. Millionaires aren't "middle class", NPR hosts, and neither are you.
Posted by Simon Pennon at 3:12 AM