“What’s with the long face?”

“I have a bad feeling about that worm over there.”
“How so?”
“Well, Tommy went for one just like it an hour ago and I haven’t seen him since.”
“That’s so Tommy - he’s probably just pulling your fin.” 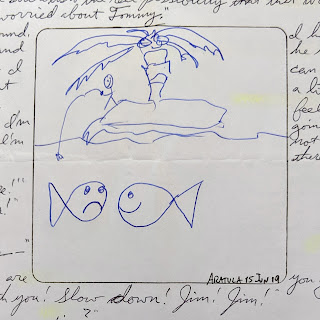 “He’s never been gone quite this long.”
“Are you telling me you’re afraid of a worm?”
“Afraid’s not the word.”
“What’s the word then?”

“Wary? Cautious? I feel like there exists some greater power attached to that worm that we can barely comprehend. Some power beyond our understanding. An unknowable being capable of destroying us on a whim.”
“Nonsense! You’ve been reading too many spooky stories.”
“Stories or not, there still exists the real possibility that the worm portends trouble. I’m also worried about Tommy.”
“He’ll be back around. I haven’t seen any sharks in the area and he knows his way around the locals. I can’t believe you’re so worked up about a little worm”
“I still have a bad feeling.”
“You know what, I’m going to go over there and eat that worm. I’m not even hungry. I just want to prove there’s nothing to be afraid of.”
“Jim! Don’t you dare!”
“Too late - here goes!”
“No!”
“See! Nothing happ-”
“Jim! Jim! Where are you going? Jim! I can’t keep up with you! Slow down! Jim! Jim!”
“What’s all the commotion?”
“My friend Jim! He ate a worm and disappeared. Same thing happened to my friend Tommy.”
“Turn around, you moron.”
“Tommy! You’re okay! What happened to you?”
“You were so scared of that worm I had to get you. I gave it a nibble then dashed off and hid for a bit.”
“Oh, thank goodness. How long do you thin before Jim comes back?”
“I suppose that depends.”
“Depends on what?”
“Well, whether or not Jim’s the type of idiot who would actually eat that worm.”