The Girl with the Blue Umbrella

"Today is a blue day," she thought. Not a depressed day, not a sad day, but a blue day. Royal. Aquamarine. Iridescent. A bright bubbly beautiful blue.

She dug through her dresser, pulling out anything and everything blue. When she'd had a mound of clothes on her bed, she began picking through them, wondering what she would wear to face the day. Skirt or pants? Or maybe her big blue denim dress? 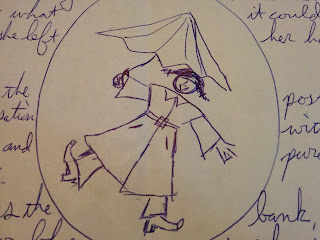 She assembled her outfit methodically, making sure each piece matched her mood. After a bit, she was mostly satisfied though she felt something was missing. She thought and thought about what it could be, but to no avail. Eventually she left her house to run the day's errands.

Her first stop was the post office, where she had a nice conversation with the clerk. She dropped of a package and purchased some postage and went on her way.

Her second stop was the bank, where the teller got a kick out of her blue suede shoes. She deposited some checks and withdrew some cash and went on her way.

Her third stop was the grocer, where the cashier enjoyed her ensemble. She bought some milk, bread, and eggs and left.

On her way home, however, she saw it. The piece that would complete her day was in a small shop window leaning against a mannequin. She rushed in. She bought it. She jumped for joy.

Someone snapped a quick picture that became a small sensation and she's now known as The Girl with the Blue Umbrella.
Posted by Simon Pennon at 1:30 PM