"And in the name of this great Republic and all its citizens, I do hereby award you the gold star of participation."

Trumpets sounded. The crowd erupted in applause. The Prime Minister fumbled with the medal for a second before pinning it to Buford's chest and shaking his hand.

Buford politely nodded a thank you to the man in suit-and-sash before stepping forward and waving a big, appreciative, "you're all fantastic!" wave to the assembled mass. They exploded into a second round of enthusiastic applause and cheering. Pausing just a moment to soak it all in, he then turned to his left and carefully made his way back to his seat. 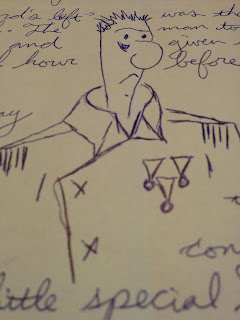 Buford made his way home, alone. He hung up his jacket on its normal hangar and removed the medals, careful to put each in its box. While he knew that they were mostly a way for the government to congratulate itself on awarding honors, he did feel a little special nonetheless.

Stripping down to white undershirt and boxers, he sat on his cot and stuffed a pillow between his back and the wall. The television assaulted him with several commercials before the news came on. Buford watched diligently, hoping that they might do a bit on the ceremony and possibly show him. At the end of the broadcast, for just a moment, they did the former, but not the latter.

The lanky man laid down to go to sleep as a rerun started to buzz in the background. He didn't think much of work or being in the audience tomorrow; rather, he hoped he'd be on TV during his ceremony next month.
Posted by Simon Pennon at 5:30 PM