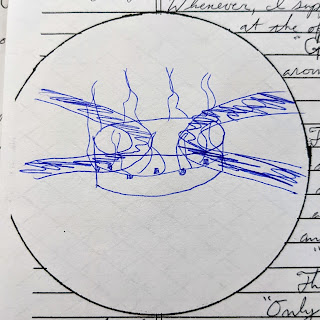 "So, would you say you have a burning passion for it?" the older man in the white suit asked, his face frozen in the most self-satisfied half open grin ever plastered upon a person. He inched a pointed finger toward me.

"An undying fire," I replied in the best Alan Rickman-as-Snape I could muster.

"That's the spirit!" my prospective employer ejaculated, punching me lightly in the shoulder as punctuation. "When can you start?"

"Whenever, I suppose," I said. "Things have been pretty dead at the office."

"Great! How about now? Things are pretty dead around here too!" More grinning ensued.

"Well, let's get a few forms filled out first," the man in white said, dropping his playful demeanor as he pulled out a few pieces of paper and gave them to me. I pulled a chair up to a table and got to work printing and signing and initialing.

"Only two guarantees in this world," he said, handing me the final piece of paper. I tapped the side of my nose to indicate we were on the same page.

"Screwing with the IRS is playing with fire," I mumbled as I handed the completed form back to the man. This earned a heavy slap on the back and some words about being a natural fit. Some more paper shuffling ensued before he opened a side door and beckoned me in.

I took in the levers and buttons and conveyor for a minute while I awaited his return.

"Alright, let's turn ass to ash - and earn some cash! People have been dying to get in here," he said, wheeling in a cadaver.