Nightmares consumed my sleep for weeks leading up to the event. They were relentless. I dreaded to even close my eyes for fear of the mental torture that might ensue. I didn’t think it could get worse. Then the first ghost came.

“Yo brah - you got any brews up in this joint?”

The apparition, fully formed and floating above my bed, had just asked me for beer. My brain rebooted.

“You okay there dude?” it asked me.

“Did you just ask for a beer?” I managed. 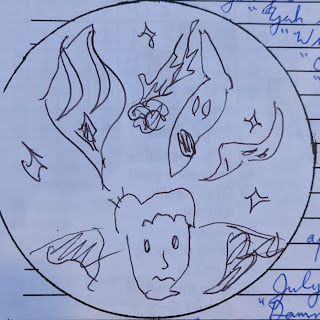 “The ghost of the Fourth of July?”

“Yeah! Let’s get some brews and set off some fireworks before the others show up.”

As it spoke those words a second spirit appeared.

“I-I-I am the Ghost of the Four-our-ourth of July,” the new ghost warbled.

“Damn bro, I couldn’t even get my drink on,” the first ghost lamented.

“Screw-ew-ew you-ou-ou, Chaz,” the second replied. I was beyond my abilitiy to comprehend. I inquired as politely as I could.

“What the fuck is going on?”

“Told ya brah - we’re the ghosts of the Fourth of July. I’m the present, they’re the past, and the future’s coming soon.”

At that, the ghost of the past snickered.

“He said co-o-oming, the ghost of the past answered.

“Oh, brah, I’m here to shoot off fireworks and drink your beer. Bertie here is going to lecture you on patriotism.”