One Cheeseburger and a Shake 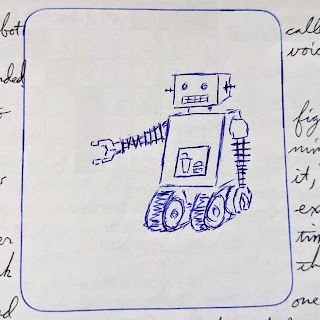 "Chzburgr-shek" the cheeseburger bot announced to the room.

"Here!" I cried out. The bot weaved its way through the crowd toward me.

"No, here!" Another patron called to the bot. It stopped.

"I think it has mine," I said, directing the statement toward the other patron.

"Here!" she said to the bot, ignoring me.

"No, here!" I said. Something about how this person was acting was getting under my skin. Even if it were her meal, the polite move would be to acknowledge the other person (me!) and sort things out. I would have sworn I'd ordered before her, but online orders exist - or maybe she had a special request.  In any case, the combative stance was unnecessary and actively slowing down the delivery of one of our meals.

"Chzburgr-shek," the bot called out again. I read confusion in its monotone voice.

"Ma'am, I don't mean to fight with you on this, but I think that might be mine."

"It's mine and I know it," she spat at me - an acknowledgement of my existence, I suppose. "Here!"

"We could compare order times or look at the receipt if you want, but I think that's my order. Here!"

The bot wheeled toward one of us, then the other, then back again. The woman didn't even look at me - her eyes were fixed on the bot.

I was beyond reasoning and wanted to win. The fight continued for a few more rounds before a neighboring table intervened - they made the sensible point that letting the woman win would get a second order out quicker. I relented and let the bot deliver the food to the woman.

"This isn't what I ordered!" she screamed, throwing the burger at the wall. As ketchup dripped down the wall, the salad bot came out of the kitchen.

"Sal'd" it announced. The woman glared at it. I glared at the woman.