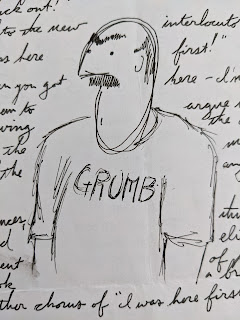 "No, sorry sir, these two were already in line." The cashier gestured at the twenty person pile up that seemed outside the older man's regard.

"Fuck that! I was here first!" Spittle shot from the man's mustache on the 'eff'.

"I don't need a number. Fuck your number. I'm number one! I was here first!" At this point, the people in line were growing restless. They were here for coffee and pastries, not a confrontation. Some were angry at the man for trying to cut in line, some just wanted the cashier to serve him in order to end the argument. Whatever combination of things they felt, none of them spoke up to interrupt the conversation.

After several more iterations of the unstoppable force meeting the immovable object, however, one of the other customers broke.

"Yo, buddy - shut the fuck up!" a man in a North Face fleece yelled. Get a number or get the fuck out!"

The angry man turned to the new interlocutor and screamed.

"I don't give a shit when you got here - I'm gonna make sure you go last."

As the angry man began to argue with the man in line, the cashier quietly began serving the others. She got through a half dozen customers before the man noticed.

"Hey, what the fuck!?" the angry man screeched. "I was here first!"

Unlike previous utterances, however, this was a chorus. This caught the man by surprise and elicited some chuckling from the line of folks. A torrent of profanity spilled from the man's mouth and, when he took a breath, the man in fleece raised his hand. Another chorus of "I was here first" washed over the shop.

This was too much.

The angry man took a swing at the man in fleece. Unfortunately for the angry man, his brawn didn't match his bluster - he was deftly avoided, clapped on the ear,  and hit the floor so hard he lost consciousness.

He came to the strapped to a stretcher and surrounded by emergency services.

"You hit your head," an EMT answered. "Also, we need to check you for drugs."

"Check me for drugs? Check that jackass for drugs," he said, gesturing at the cashier.