As mentioned in the title, this is a guest post. Credit to Lauren. 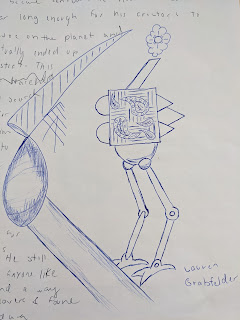 On an alien planet, there's a world that's been taken over by robots. They were created to resemble their creators. The creatures that created them were somewhat advanced; a little more than humans. Eventually, one robot became sentient: he flew under the radar long enough for his creators to cause havoc on the planet and eventually go extinct.

This sentient bot continues to search the world for a bot like him and gets into some trouble when coming up against weapons that were created for destruction. He still hasn't found anyone like him, but he found a way to create flowers and found a cool bandana.