It had been a full day since the family first sought refuge in the small cabin. The hours had been spent pacing, arguing, and, for the two youngest members, huddling together under the table. They knew they couldn’t stay there, but the danger outside was too great to chance. 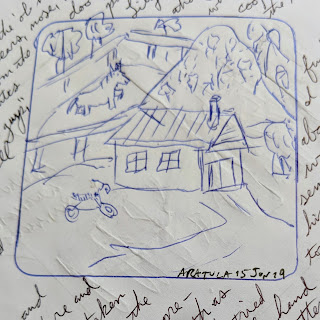 “Do you think it’s still out there?” asked Shawn, the oldest brother. At nineteen, he’d already taken over most duties on the family’s farm and had been looking forward to this ‘relaxing vacation’ for months.

“I don’t know - why don’t you check?” Cary spat. Sixteen had hit him particularly hard and a week with his family sounded like torture even before it had gone south. Spending the past twenty four hours within a few yards of the clan had worn through whatever mental fortitude he had left.

“Cary Jacob!” their mother admonished. “How dare you. That creature need only lock eyes with you to make its home in your brain. You saw what it did to your father!”

The group relived the experience of the ‘old man’ in his last moments, screaming in agony before his brain began to run out his ears, nose, and the holes where his eyes had been. His body still lay a few steps away outside the door; as far as anyone knew, the creature hadn’t moved it. Several minutes passed before anyone spoke again.

“I thought unicorns were good guys,” Lily, the youngest, broke the silence.

“Yes honey, that’s what we all thought,” her mother said through a comforting hug.. “That what we were told.”

“I can’t stand being cooped up in here!” Cary cried out, making toward the door. Shawn jumped in front of him.

The whole family was taken aback as Cary laid out how each and every one of them was worse than each preceding person and how he could not spend even one more minute in their presence. His gesticulations grew wilder and spittle flew from his mouth as his passionate tirade picked up.

Having exhausted what could be expressed verbally, the teen made a move toward the door, prompting his older brother to attempt to restrain him. With this, a great fight broke out - punches and kicks and grapples were the order of the day. While Shawn was physically stronger, he was handicapped as he sought only to restrain his younger brother; the latter was willing to make it a fight to the death. A swung chair decided the conflict in Carey’s favor and he charged the door, leaving Shawn on the floor with a broken leg,

Panting, bloodied, and slightly foaming at the mouth, Carey yanked open the door.

The unicorn was there. The two locked eyes. The family cried out. The beast cried out. A moment later and its eyes had exploded and the beast fell over, leaking brains. Everyone was stunned.

“It couldn’t make a home in your head,” Shawn said through clenched teeth, “because you’re mentally unstable.”