Trekkies to the Rescue 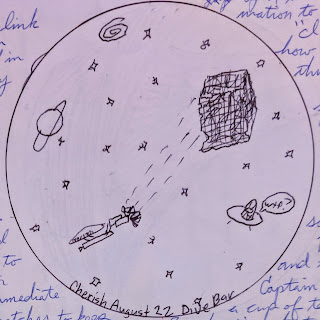 “I said beam yourself. The fuck. Up.”

“How dare you speak to your commanding officer like that?”

“What are you going to do about it? You’re there and I’m here.”

With a slap of the chest the communication link between the two was disconnected. The Captain pondered his predicament - as yet undetected in the bowels of a Borg Cube, he wouldn’t stay that way for long. With the insubordination of the junior officer, his assimilation was almost certainly guaranteed.


All of a sudden there was a great crash and a wall of flame engulfed the Captain. It dissipated as soon as it had arrived as the vacuum of space took control. The Captain, much worse for wear, managed to avoid fatal injury or permanent damage to his space suit. A handful of seconds after determining he was still alive and not in immediate danger he applied a few strategic patches to keep the air on the inside of his suit. Upon completion of the task he took stock of what had transpired.

Mere meters away from where he stood, a classic “Area 51” style flying saucer had penetrated through the defences and armor of the Borg vessel and come to rest. It was entirely unscathed, despite the destruction surrounding it. In a porthole, a face appeared and beckoned the Captain toward a now-opening hatch.

With no other viable option, the Captain followed the summons and went aboard the ship. Hatches closed, air-locks engaged, and soon enough a human figure strode forth and offered his hand to the Captain.

“Well, we saw there wasn’t an obvious way to get you out of the pickle you’d gotten yourself into. We also saw you’d been renewed for another couple seasons. So we figured we’d come get you and resolve things.”

“Yes, indeed. That was probably nonsense for you, sorry. Don’t worry about it. Care for a cup of tea?”

“I suppose. I’m still rather confused - how did you make your way this deep into this vessel?”

“Oh, plot armor - the same stuff your space suit is made of. Wonderful stuff.”

“We’ve tuned in every week! Oh, right. We, uhm, saw you on our viewscreens.”

“And what is to become of me?”

“Well, you have an unresolved plot point, so we’ll head there directly.”

With that the man threw a few switches and the UFO began its march toward the Captain’s ship. A young woman gave the Captain a cup of tea followed by a knowing pat on the hand. By the time the tea was finished, the craft had arrived and, having shrugged off phasers and shields, docked in the appropriate bay.

“Alright, Captain, this is where we depart.”

“You’re welcome.” The man paused. “Oh, could we get an autograph before we go?”

The Captain assented and signed a proffered picture of himself.

The strange ship left as soon as the Captain was two steps on deck. It only took a few more steps before he was face-to-face with a sheet-white, sputtering junior officer.