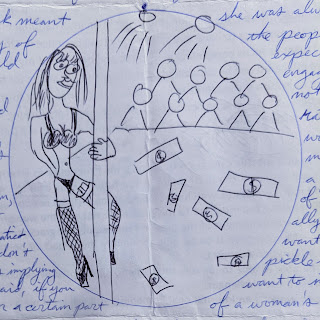 Chrysler had one more trick up her sleeve. Well, not up her sleeve, per se, as she had divested herself of her garments over the previous few minutes, but the phrase is applicable idiomatically at the very least, if not also euphemistically. Perhaps it works double duty as a euphemism, given the nature of her work. In any case, she had one final talent to display.

By talent, of course, we’re not talking about thirty-some kilograms of precious metal. She loved Gold and Silver - both had lockers near her - but Chrysler had none of their namesakes to her own name. The closest she came was a small “copper” bracelet Jade had given her made of a stainless steel police badge. No, talent in this case refers to skill and mastery of craft. Before we go down that road, it should be clear we’re talking about the intangible craft, not the nautical kind, as it was preceded by the word skill just moments ago.


No, not the brand Skilcraft, that’s spelled completely different.

In any case, Chrysler had found herself in a tricky situation. Yes, of course her line of work meant she was always in a “tricky” situation, given many of the people she interacted with at her job would expect her to “turn tricks - that is to engage in some sexual act (and not an act as in the theater or carnival, rather as in an alternative to the words perform, work, or even “do”) for money - but in this case we mean a perilous situation, a conundrum, a pickle.

Get your mind out of the gutter.

I mean that idiomatically, of course, not metaphorically - I don’t want you to go around thinking that I was implying “pickle” was some synonym for penis. That said, if you want to interpret “gutter” as disgusting slang for a certain part of a woman’s anatomy, well, we’d be back on track! That’s what I meant when I said Chrysler had one more trick up her sleeve - sleeve being, of course, another less-than-delicate term for, well, “lady bits”.

Chrysler had been practicing for weeks just in case such a scenario popped up - don’t go there - having gotten the advice from her friends Porsche and Mercedes. They were veterans (in that they had been in the industry for some time, not that they had served in the military, though both had, erm, “served” the military on a few occasions, as it’s fairly easy to part young men from their money by parting one’s legs), and both recommended Chrysler learn a skill or talent or something  that would pull the eyes of the club goers back toward her in case she hadn’t yet earned her stage fee.

Confident in the weeks of training, she pulled the harmonica from her vagina.

(For the record, I think she should have went with a kazoo in the wazoo, but here we are.)
Posted by Simon Pennon at 5:55 PM