"Simmons!" the bald man shouted over the machinery. "Get back to your station!"

Simmons was having none of it. Further committing to his rebellion, he pulled an egg off the conveyor belt.

"Don't you dare!" the bald man yelled too late - his last syllable half a shriek as he dodged the projectile.

The other workers on the line emerged from their shocked states as a second egg flew across the room. Some sought shelter, some watched the spectacle, mouths agape, but a majority decided to join in the excitement, consequences be damned. In just a matter of seconds, eggs of all colors and patterns were splattering against walls, coworkers, and, most seditiously, against the bald man. 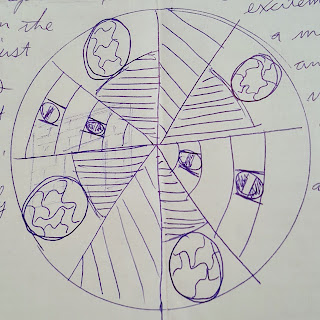 Simmons upped the ante by climbing atop the giant feeder machine. Now lording over hundreds, if not thousands of yet-to-be-dyed eggs, he hurled handful by handful at the bald man, now crunched in the fetal position.

Without the man's reaction, however, the excitement quickly died down. The workers slowly peeled off and headed for their lockers and the exits, many unsure how they would avoid spreading the eggy mess to their vehicles. It wasn't long before just the bald man and Simmons remained.

"Why?" gasped the bald man.

"I fucking hate Easter." Simmons replied. The bald man rolled over, eyes about popping out of his head.

"Then why the fuck are you working here!?"