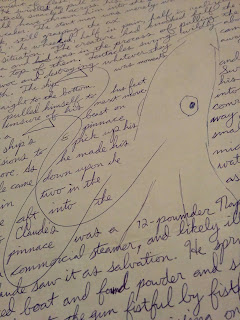 Claude pulled himself to his feet and was, for a moment, unsure of his next move. Surely he couldn't fight such a beast on his own, so getting the ship's pinnace into the water with provisions to pick up his comrades seemed the best move. As he made his way, however, a great tentacle came down upon the smaller boat and cracked it in two in the middle of its keel, dragging the aft into the water.

Much to Claude's astonishment, hiding under the pinnace was a 12-pounder Napoleon - an unusual sight on a commercial steamer, and likely illegal. At this point though, Claude saw it as salvation. He sprinted toward it and the wrecked boat and found powder and shot packed side-by-side. Shoving powder into the gun fistful by fistful, he prepared it to fire on the beast. He was just missing one ingredient - the primer.

His mind raced for a solution and, arriving at one, his feet raced against death's clock. He dove deeper and deeper into the bowels of the ship until he got to the boiler. Scooping out a great mass of coal, he raced once more, dodging debris and tentacles, to dump the coal straight down the barrel, blowing the shovel out of his hands and the shot into the squid, like a musket ball through a watermelon.