One Answer to the Fermi paradox

Jim didn't know this symbol. This was not a good sign, as the beeping became more and more urgent.

He wiped his brow.

He thought about all those TV shows he grew up with - if only he was Captain Kirk! He'd enrolled in the first program available for interstellar travel in the hopes to emulate his icon. He knew it was dumb, but greater achievements have come from smaller things - like the guy who discovered a whole spy ring trying to get to the bottom of a $0.75 accounting mismatch. 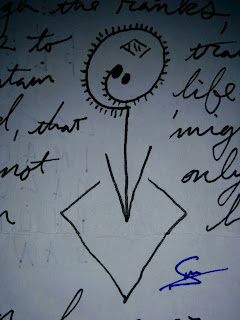 To be honest, Jim had done a great job. Having rocketed - no pun intended - through the ranks, he secured an appointment on the third space ship to travel to another solar system that might contain life.

As Jim soon learned, that 'might' wasn't necessary - the system in question not only harbored life, but had, at one time, been home to intelligent life.

For whatever reason, however, that intelligent life was no longer there.

The crew had cataloged every sign and every symbol. Jim had taken it upon himself to be the unofficial expert over the past fourteen months of exploration. He'd wanted to stand out. To be the first to actually contact a non-human intelligent being.

Unfortunately that eager attitude had brought him to today's predicament; a countdown was on, but no one knew exactly to what. Well, mostly no one.

The reason there were no remaining beings who'd created this technology on this planet was due to a great nuclear war.

With no escape and unable to decipher the rune, Jim and his team became the final victims of a century-old conflict.