The amulet seemed to float at the base of her neck, the ebony on her pale white skin a centerpoint between pink lips and nipples.

"Relax," she cooed, letting the last of the sheer black fabric drop to the floor. "I'm certainly not here to harm you."

Chuck was putty. Sure he'd been with 'escorts' before, but this was... different. This was fantasy. This was a grand tale of two bodies coming together in bliss. He almost melted as her hand lifted his chin. 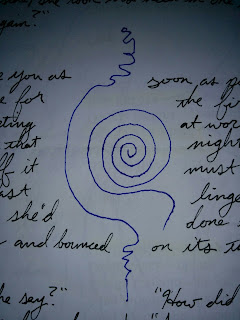 Chuck let his eyes meet hers. She pressed into him, both falling on the bed. He felt like he'd fallen into a king's silken cushion, despite it being a pay-by-the-hour queen. The woman worked her magic on him, starting with his lips and kissing every inch of him. They were a tangle of flesh soon after.

As they lay side-by-side, she took his head in one hand.

"When can I see you again?"

"When? I want to see you as soon as possible. Tuesday? Wednesday?"

Chuck averted his gaze for the first time.

"I... I have a big meeting at work Thursday that I have to prepare for. Perhaps that night or Friday?"

She gave him one last lingering kiss and clothed herself as gracefully as she'd done the reverse. Chuck watched the amulet as it swung and bounced on its thin gold chain.

Maria took a long drag from her cigarette, clutching the amulet in her left hand.

"Thursday - the strike is on Thursday. I almost feel bad for the boy. This must be his first assignment."

"I don't know," she sighed as she rubbed the black piece. "I just don't know."

"How did it go Lieutenant?"

"As you predicted, Sir. The woman with the amulet was... most enjoyable."

"Good, good. And what did you tell her?"

"Thursday it is then! We'll send a token force; they'll have a token resistance," the bald man grinned. "And we'll get funding for a couple more years."