They came at me, glowing eyes, knives out. I felt the brick bite into my jacket as I pressed up against the wall. I don't know how I'd managed to anger the robots, but I certainly had. Who knew trash-bots had feelings?

"This sentence is a lie" I half-stated, half whimpered.

"So much for that, I suppose." 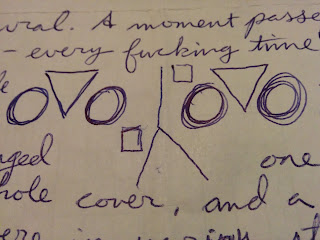 As I pressed deeper into the wall praying desperately to magically slip through it, a scrape, a bang, and a blue flash interrupted my terror.

"Hey, kid! Push that one and scram!" A voice cried out. I remained a mere mural. A moment passed before the voice cried out again, "FINE - every fucking time!"

The bots, meanwhile had shifted - one examined the damage, one looked for the assailant, and the damaged one stared me down. A short pause, a man-hole cover, and a coverall-wearing man later and the three were in various states of disrepair.

"No problem kid. It's The Janitor's job to keep the streets clean. Now you should get home before anything else goes wrong."

"Wait," I said, confused. "I thought it was the trash-bot's job to keep the streets clean."

"But seriously ,how do you expect to keep the streets clean if you keep destroying trash-bots?"

The grubby man looked at me, looked at the bots, and picked up one of their knives.

"I think I understand what they were up to now," he said before plunging the knife into my stomach.