The Man at the Podium

Sherry was visibly shaking. She was sweating too, but that was understandable amidst the throng of people who'd come to see Him speak. A man next to her in cargo shorts and a faded silk-screened shirt tried to push past the crowd for a closer vantage. Sherry took the opportunity to follow close behind - well timed apologies and embarrassed looks made it seem like she was just keeping up with a friend or significant other. Not that she needed the sympathy - she was just raised to do such things. 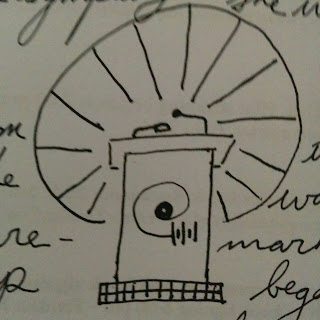 Standing third from the front, she finally felt close enough. She watched the men in suits give their welcoming remarks. A blonde woman in a smart navy get-up began His introduction.

Sherry was anxious; it was almost time.

The woman's words about His works and His accomplishment washed wasted over Sherry, despite eliciting the occasional remark of wonder from nearby bystanders. Sherry waited for His name.

And there it was.

The crowd erupted in applause and cheers as He made His was across the stage. Clad in a great red robe with golden furnishings, He made His presence felt as He commanded the stage.

As He stepped behind the podium, bleached white teeth shining from a great frame of black beard, she let out a whisper.