It'd been a long time, but the tomb was once again open.

"What do you make of that?" Johnny asked, pointing at the strange objects lined up against the wall.

"Oh, jeez! I don't know Johnny, what do you think they were used to make?"

"Yeah - they look like tools - maybe that one stirred something."

"Oh, you're right!" Johnny picked up one of the objects. "What do you think this one did?"

Just then there was a scream and a rush of air. 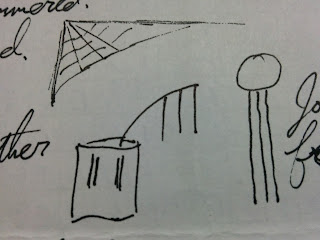 "What was that!?" both boys yelled in unison. A low rumbling began.

"Who dares enter my place of rest?" A deep rumbling growl asked. The boys met eyes.

"Hello Tim, hello Johnny," the voice answered. The boys looked at each other for another moment, then began to look around.

"Kill you! Ha!" the walls shook with the laugh. "I just wanted to know who you are!"

"I'm the ghost that haunts this place."

"Are we disturbing you?" Tim chimed in.

The boys' eyes near about bugged out of their heads.

"Can I ask you something, sir?" asked Tim.

"What is this used for?"

"Aesthetics, I suppose - it was here when I moved in."