The bag wasn’t anything special, but it caught her eye. Everything seemed just the slightest bit more attractive than the purse she was carrying - the color seemed to match her dress, the clasps had a bit more sparkle to them, hell, the size seemed like it might accommodate those one or two last minute additions to her day. She basically had no choice other than to enter the shop.

Inside the shop, she exchanged pleasantries with the cashier before settling on the object of her desire. The price, however, became a sticking point. Where the inferior assemblage of cloth and leather that had entered the shop with the woman had only cost a week’s wages not even a month prior, the clearly superior accessory cost three times as much! 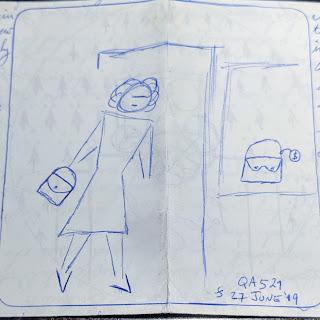 A struggle ensued. The woman began to extoll the virtues of her own bag and point out every imaginable flaw in the bag she desired. Once a comprehensive list had been made plain, a suggestion of an equal trade floated between the two women before being swatted down by the cashier.

Realizing a trade-in was unlikely, the woman employed a new tactic - that of allusion. The cashier was quickly informed by metaphor and simile how the shop bore a likeness to ne’er-do-wells - specifically those who would seek to deprive a person of their money by extra-legal means. It was made quite clear to the cashier that, despite having a perfectly functional bag in her hand, the woman could not bear to live unless she acquired the bag in the window.

Taking the woman’s life into her hands, the cashier refused to budge on the price. The bag would stay in the shop window until a person paid full price for the item - no trades, discounts, or deals.

Having exhausted her arguments and unable to get the cashier to lower the price, the woman employed her final strategy: she asked to see the manager of the establishment. A smile flicked across the cashier’s face as she pointed to the nametag on her chest. Below the name the woman hadn’t bothered to read was, in small capitals, another word previously unread: owner.

Defeated and mortally entwined with the fate of the purse, the woman dug into her own and retrieved a credit card. The transaction took only a minute and ended with the woman walking out with the new bag in her hand and a slew of curses under her breath. The old purse rested, discarded, on the counter.

In a minute, however, the interaction was mostly forgotten. In two, the woman had already spotted a pair of shoes that would go perfectly with her dress.