There is truth in the dance. Bodies interacting, people displaying a primal movement, bone-deep impulse - whatever it may be - released by the rhythm.

But, like the fart sound of two sweaty chests during sex, there is humor in the dance as well. At least Rodney was a good sport about it.

"It's not so much that he has two left feet," a voice floated out onto the floor. "He has a three legged race going on out there!" Rodney ignored the jab - he knew what he looked like. Beth, however...

"Hey you wanker!" she shouted at the unseen heckler. "Why don't you get a life!?" 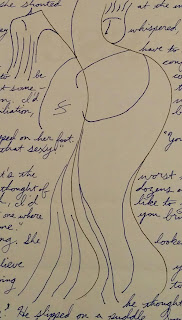 "Rodney, dear, you have to stand up to those people. Be a bit more confident for once!"

"Everyone tells me to be confident. Then when I am confident about something, it always turns into humiliation. I'd much prefer to just skip straight to humiliation, because I can deal with that."

"Oh - OW!" He'd stepped on her foot. "You should still be more confident - girls find that sexy!"

"Sure you can! what's the worst that can happen?"

"Oh, right," Rodney thought of dozens of terrible things before continuing. "Beth, I'd like to go on a date with you - a real one. Not one where you bring a bunch of your friends without telling me."

Beth stopped dancing. She looked Rodney over. She smiled.

"Rodney, I can't believe you'd say something like that. I... I'm going to get a drink."

'So much for that', he thought. 'At least I won't have to dance any more.' He then slipped on a puddle. Someone called out "best move all night!" Beth wasn't there to give him a smile.

There is truth in the dance. Desires play out and often conflict. There is humor in the dance as well. Conflict breeds the absurd.

All Rodney could think about, however, was that his life was one big joke.
Posted by Simon Pennon at 9:30 AM