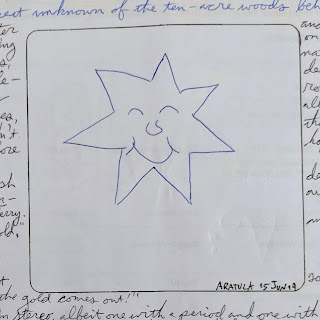 Sunshine and smiles permeated the small encampment. Anything seemed possible on a day like today, and the trio were bubbling with excitement.

“No way! Monsters aren’t real,” retorted Brian, who had to keep pulling up his pants. “My brother said so.”


The three stood up after a bit, having eaten the small breakfast Terry’s mom had made for them in the house just a few dozen yards away. Despite its proximity, this had been a CAMP OUT, as the boys had roasted marshmallows and spent the night in a tent. As the fire had dwindled the previous night, the three had vowed to set out on an ADVENTURE the next morning - after breakfast and brushing their teeth, of course. These requirements met and promises to return for lunch made, the three set off into the great unknown of the ten-acre woods behind the property.

A half an hour later and there were three pairs of shoes and socks sitting on a rock next to a small creek. The boys, naturally, were sqatting in the ankle-deep water, diligently inspecting the muddy rocks at the bottom. While careful with their shoes, all three now had wet bottoms as they hadn’t thought about their shorts and pants before hopping in and looking for treasure.

“We need a pan,” Josh declared while frowning at a sparklier-than-average rock.

“It’s easy! You put some water in the pan and wiggle it until the gold comes out!”

“Oh-” the reply came in stereo, albeit one with a period and one with an exclamation mark.

“I saw a baby lobster” he answered, now weighing the balance between trying to find it again and keeping his toes safe from pinches. The two others, having not seen the creature, were less concerned for their safety and immediately began the search. Brian came to the same conclusion and started turning over rocks anew.

The three toiled at their task for several minutes before, improbably, Brian spotted the creature again. The novice fishermen corralled and caught the crayfish, being careful not to get pinched in the process.

“What do we do with it?” asked Terry.

“Let’s keep it as a pet” answered Brian. This seemed sensible enough to the other two, so the three of them picked up their socks and shoes and started the walk home. They traded off carrying their new pet - dropping it a few times in the process - because each of them wanted to spend time with it. It was agreed, however, that Terry would have the honor of presenting it to his mother as they were, after all, behind his house.

Taking one last look at the creature before handing it to Terry, Josh had a thought.

“See guys, we DID find a monster!”