Teeth chattering, a bug-eyed ball of frizz dug its claws into the wooden counter.

“You’ve had enough,” the man in the stained white apron said with a wave. 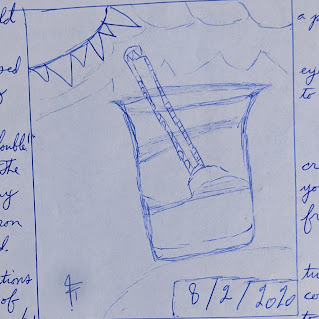 “You’re making a scene,” the man whispered forcefully. The creature stared at him and vibrated.


“Look at yourself - you can barely stand still!” If I give you another cup you’re likely to explode. What good can it do you anyhow?”

This line of attack took a few seconds of humming silence to process. The creature then moved its mouth slowly and deliberately.

“You can barely hold a pen.”

This elicited a raised eyebrow.

“I’m still not going to sell you any.”

“Especially not a double!”

The man in the apron frowned.

The creature’s vibrations turned to nods. A clinking collection of coins and bills made their way from its pocket to the counter.

The man behind the counter performed his usual ritual of grounds and knobs and steam. At the end of it, an espresso appeared - the creature’s twelfth of the day.

It wasn’t cool enough to drink before it was gone - poured down an impatient throat. The creature hisse and gurgled and vibrated anew as the elixir hit its system. Then, with even wider eyes, it looked at the coffee man, whispered “no”, and exploded into a gory collection of viscera.